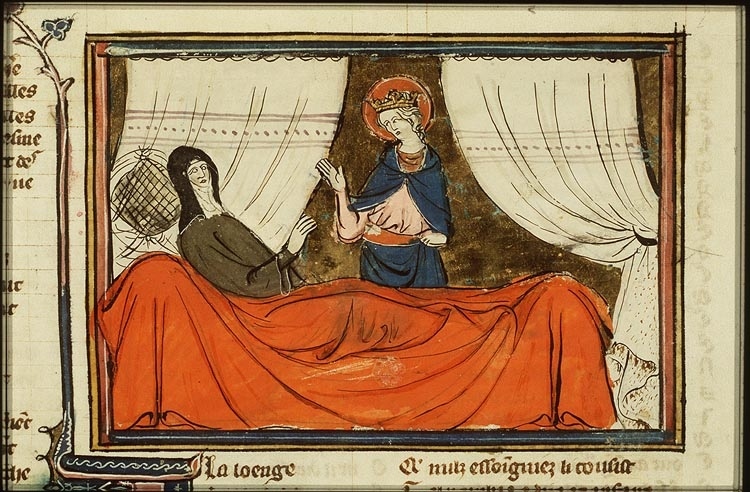 Aurélie and I have just returned from a wonderful two days at University College, Dublin, where we’ve been attending the 2017 conference of the History of Women Religious in Britain and Ireland (H-WRBI) network: a selection of papers covering a wide range of approaches, examples and material related to exploring the varied lives, experiences and impacts of women religious from the medieval period to the present day.  The conference theme this year was the archive: oral, material, visual and digital, and hearing such rich papers about the research projects and challenges of the network’s members has thrown up some great methodological questions for us on the Medieval Convent Drama Project – even when, as in the case of many speakers, the areas under discussion were focused on the nineteenth and twentieth centuries.

I was particularly interested to hear speakers discussing the creation and curation of digital archives, and the construction and interpretation of oral history and memory.  Several speakers analysed semi-structured interviews with sisters which they had filmed and transcribed, and which formed the raw data for their research.  We have recently set up some partnerships with a group of women’s houses in Fribourg and the surrounding area, with the intention of performing a selection of our medieval convent plays using an all-female cast within their convents, performances will be open both to the sisters and to members of the public.  We’re also planning to undertake at least one additional performance with a cast made up of sisters, as well as these public performances by non-monastic actors, in the convent spaces.  The papers I heard this week at HWRBI have really made me think more deeply about the best ways of generating, accessing and recording the sisters’ responses to participating in these events, and their reflections and/or recollections concerning the role and significance of drama as part of convent life, both in the past and in the present.   We’ve already had some very interesting informal discussions with a Carmelite sister in Belgium, whose convent generously welcomed us to view their archive and to discuss our project: these conversations revealed that drama is an ongoing part of Carmelite recreation (at least in this particular convent) to this day, and we have anecdotal evidence from some of the women’s houses in Fribourg with whom we are partnering that theatre is practiced quite regularly here too.  Making space, time and provision within our project to ask the nuns with whom we will work to think and reflect out loud on the devotional and emotional affordances of theatre, both in terms of practising it and in terms of watching it unfold in their convent spaces, could provide some really important leads for us, and recording their reflections as expressed verbally by different individuals would allow their voices, thoughts and feelings to raise some of the research questions, or to frame a part of the research agenda, which we seek to explore.

I’ve also been prompted by some of the papers at H-WRBI which explored films made by, or with the cooperation of, sisters to think more creatively about one of the outputs we will produce during this phase of the project.   We had already planned to film some of the preparation for the performances, documenting decisions taken during rehearsals and actors’ reactions to the texts, and perhaps juxtaposing some of the same scenes performed in different spaces and at different locations.  I’m now wondering if we might not be able to try to include some of the sisters’ voices here too – perhaps alongside relevant medieval and later archival material from the convents from which our plays originally hail – to create a documentary-style piece or even, perhaps, a digital ‘exhibition’ incorporating film, image and text, that focuses not just on the performance of the medieval plays from the actors’ and director’s perspectives, but also on their reception within the different religious orders and different groups of nuns who take part in their performance, either through acting themselves or through spectating.  It’s early days yet, of course, and we’ve got a lot to consider here – not least in terms of requesting and gaining permission from the various people and research repositories involved – but H-WRBI 2017 left both Aurélie and I feeling enthused and excited about the range of approaches and outputs we could potentially undertake with the Medieval Convent Drama’s research materials.